This Japanese beetle eradication project is led by the Oregon Department of Agriculture, in cooperation with partner agencies and the communities where it takes place.
​Ashley Toland
Eradication Entomologist & Project Coordinator
Hello, my name is Ashley Toland and I am the eradication entomologist for the Oregon Department of Agriculture in the Integrated Pest Prevention and Management program (IPPM). In IPPM, we work to make sure invasive insects, like Japanese beetle, do not establish in Oregon. I have a bachelor’s degree from the University of Rhode Island in Environmental Science & Management, and a master’s degree from Virginia Tech in Entomology. I am originally from Massachusetts, but I recently moved to Oregon and I am excited to explore all this beautiful state has to offer!
​ 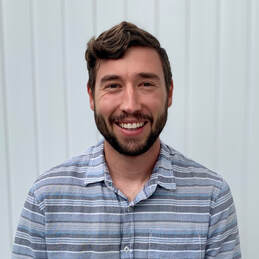 Hello, my name is Cody Holthouse and I am the Japanese Beetle Eradication Specialist for the Oregon Department of Agriculture. My job is to facilitate trapping, mapping, pesticide applications, insect identifications, and other eradication efforts for Japanese beetle in Oregon. I have studied invasive insect ecology in Utah for the past five years, where I earned my PhD in Ecology from Utah State University. Before that I was in Angwin, California working on my bachelor’s degree in Biology at Pacific Union College. I am excited to be here in Oregon and further the eradication efforts of the Japanese beetle.
Jake Bodart
Manager of Insect Pest Prevention & Management
My name is Jake Bodart and I am proud to be the manager for the Insect Pest Prevention & Management program for the Oregon Department of Agriculture (IPPM). The IPPM program is made up of a very talented group of entomologists, coordinators, and colleagues to protect Oregon’s agricultural, environmental, and natural resources from damaging invertebrate pests, like the Japanese beetle. I have a bachelor’s degree from the University of Maryland in Biology and Ecology with a minor in Sustainability, and a master’s degree from the University of Arkansas in Entomology. I have lived and worked all over the east coast and south east, and joined the Oregon Department of Agriculture in January 2019.
​
Oregon Department of Agriculture’s Insect Pest Prevention and Management program coordinates early detection and rapid response to insect pest invasions to protect Oregon’s agriculture, natural resources, and economy. Early detections of pest threats are possible through surveys of gypsy moth, Japanese beetle, and light brown apple moth among others.

​When you give us a call, send us an email, or submit a contact form, someone from the IPPM team will respond directly.