How to Identify a Japanese Beetle 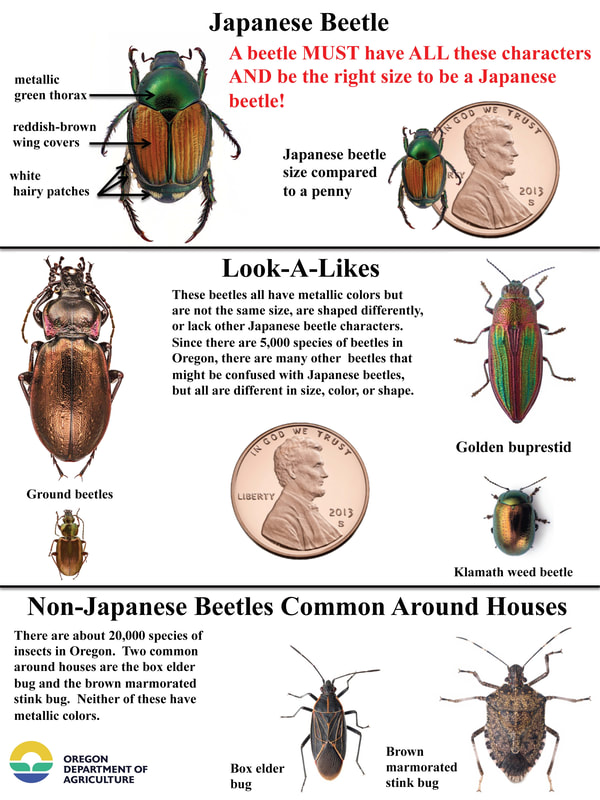 The Japanese beetle population in Cedar Mill, Bonny Slope, Oak Hills, and Bethany of Washington County was small enough when detected that eradication may be possible.


Q: What is an invasive species?
According to the Oregon Invasive Species Council:
“Invasive species are animals, plants, and microorganisms that are not native to Oregon and once here can reproduce so vigorously that they replace our native species. They pose a threat to key sectors of Oregon's economy that depend upon natural resources and native ecosystems.” Learn more about invasive species in Oregon here.


Q: How do we know that Japanese beetle is a problem?
Like many invasive species, Japanese beetles outside of their native habitat do not have predators in the United States to balance out and stabilize their population. Throughout the Eastern and Midwestern United States, JB populations create large-scale destruction to garden plants and agricultural crops. Because the beetle is a serious threat to many of Oregon’s thriving industries, including nurseries, turf grass, and specialty crops, ODA is working hard to contain the JB population through quarantine and treatment. The fight to eradicate and prevent invasive species such as JB is an effort to protect Oregon’s agricultural livelihood.


Q: How would Japanese beetle affect crops, gardens, and forests?
This invasive pest can be destructive in multiple life stages. As an immature “grub” it feeds on the roots of grasses, limiting the plant’s ability to acquire water, creating dead patches of grass or turf. As an adult, JB feeds on leaves creating a pattern known as “skeletonizing”. The feeding results in the defoliation of the plant. Roses, grapes, fruit trees, and berry plants are highly susceptible to this type of damage. Defoliated plants not only lose their leaves, but are are more susceptible to disease and stress, have higher death rates, and lose the ability to photosynthesize. Without photosynthesis, essential ecosystem services such as purifying air, maintaining water quality along streams and rivers, and mitigating extreme temperatures (via shading) are affected.


Q: How do I know if I have Japanese beetle on my property?
In the fall, winter and spring, Japanese beetle is an immature “grub”, and feeds on the roots of grasses, limiting the plant’s ability to acquire water. Look for dead areas of turf or grass as a sign that Japanese beetle grubs might be present. In the summer, you may find Japanese beetle adults feeding on leaves, fruits or flowers (Japanese beetles love roses!), see this look-alike guide for tips on identifying Japanese beetle.

If you live outside the treatment area and think you have JB on your property, contact the ODA team to improve the detection process.

Note:  Japanese beetle are often confused with boxelder bugs. If it’s late autumn and you have hundreds of beetles coming into your home, these are not Japanese beetles. Boxelder bugs are native to North America. These bugs are not invasive nor are they poisonous, but they can be a nuisance as they seek out warm places to stay for the winter. To learn more about boxelder bugs and how to prevent them from coming into your buildings, read this boxelder bug info page maintained by University of Minnesota Extension.


Q: How did Japanese beetles come to Oregon?
JB was first found in the United States in a nursery in New Jersey in 1916. Since then, JB populations have spread throughout the East coast and Midwest, causing devastating impacts in home gardens and agricultural crops. Japanese beetles most likely were brought to Oregon by someone moving from an affected area with a potted plant. JB eggs and larvae live in soil and can be easily transported by accident, hidden from the view deep in the soil.

Plants, grass clippings, sod, and other yard and landscaping materials can easily transport JB from one region to another. That’s why ODA has created a yard debris quarantine for part of Washington County. For more information, check out our quarantined Yard Debris & Landscaping FAQ section (below).

​
Q: Where is the Japanese beetle in Oregon?
There have been three separate beetle detections in Oregon in recent years:

Q: How do you treat an area for Japanese beetle?
What is being treated? For specific information about what treatment is, please visit our Treatment page.

Q: How will I be notified?
You will be contacted at least 72 hours in advance to inform you what day your property is to be treated. Your notification will be via the phone number, text number, or email you provide us on your consent form.

Q: I've already received the granular treatment, why would I need a second treatment?
In the 2019 eradication, we started a supplementary foliar application of Acelepryn for properties within a smaller high beetle density area within the larger treatment area. The foliar spray targets the adult stage of Japanese beetle, while the granular treatment targets the larvae. Targeting the beetles at two life stages will help further reduce the populations, and also protect your garden from damage caused by adults.
Back to the Top

Q: What is the pesticide that the ODA will treat my land with, and will it harm humans, pets, or other insects?
Acelepryn G® is a targeted larvicide that kills certain pests in their larval state in the soil. This is a “reduced risk” pesticide and is not considered to be a health threat for humans, pets, and other insects that don’t go through a larvae stage in treatment areas (including pollinators) when applied correctly.

According to the label, “Acelepryn G is recommended for Integrated Pest Management programs on turf and landscape ornamentals because it does not directly impact natural arthropod predator and parasitoid populations including ladybird beetles.” Since the treatment targets certain pest larvae in the soil, the treatment with Acelepryn G® has no adverse effects on pollinators when applied according to the label instructions. The common lawn pest, crane flies, are a targeted pest of Acelepryn G.

Q: What effect does it have on pets?
AceleprynG does not present a hazard to humans, or domestic animals, according to the EPA. The harm that a pesticide can cause humans and animals is known as toxicity. EPA has determined that AceleprynG falls into a low toxicity category by all routes of exposure. It is unlikely that even direct exposure to chlorantraniliprole, when used according to directions on the Acelepryn G’s label, will result in adverse health effects to humans or animals. There are no caution words on the product label and there is no re-entry period. Which means once the product is placed on the ground, people, kids, and pets can re-enter the yard and walk on the grass. Although we do recommend watering your lawn first to help dissolve the granules which improve the efficacy of the treatment, and to exercise an over-abundance of caution. For more information, please visit: https://oda.fyi/JBHealth

Q: Why do I have to keep my pets inside all day?
After driving, the greatest threat to the safety of our crew is being bitten by dogs. Due to the current Covid-19 pandemic, our protocols (such as if we are allowed to knock on residentials doors right before treatment) are fluid and subject to change. This is why we request that dogs be kept inside the day of treatment, to try an minimize this risk in case we are not able to knock on your door before treatment. If you are not able to keep your dog inside on the day of treatment, let us know by phone, email, or by writing a note on your consent form and we can make arrangements to call you right before treatment so dogs can be put inside.

For more information about the larvicide Acelepryn G®, please visit the Oregon Health Authority’s Q&A page.
Back to the Top

Q: What’s the difference between a quarantine area and a treatment area?
The quarantine zone is a specific boundary developed by Oregon Department of Agriculture based on trap catches of Japanese beetles and likelihood of spread. High-risk yard debris is not allowed to move outside of this zone in order to contain beetles in the current infestation area where treatment is occurring. To view this year's treatment zone, visit the Treatment and Quarantine boundary map.

Q: What is a quarantine? What are the consequences for not adhering to the quarantine?​
A quarantine is established against the pest known as Japanese beetle (Popillia japonica) per Oregon Administrative Rule (OAR 603-052-0127). The Oregon Department of Agriculture has the authority to take action should non-compliance result in the spread of the Japanese beetle.

Failure to eradicate and contain the beetles will result in an established beetle population and a quarantine of commercial agricultural and nursery products to nearby uninfested states, at significant cost to local industries. Restrictions on out-of-state sales for nursery products and other agricultural products could be devastating to these industries and businesses.

Q: Where is the Japanese beetle quarantine drop site, and when can I use it?
Best Buy in Town Landscape Supply
2200 NW Cornelius Pass Rd. Hillsboro
June 1st - October 1st
Mon - Fri: 7:00am- 4:30pm
​Closed Sunday

Q: How long will the yard debris quarantine last?
The quarantine is ongoing until yard debris is no longer at risk of moving the beetle. The drop off start to be determined but will be until early October while adult beetles are active.


Q: I live in the treatment area and would like to replace my sod or redo my landscaping. Where should my old sod or landscaping plants go?
Whenever possible leave landscaping material in place and postpone extensive landscaping activity until the end of the eradication project. If that is not an option, during April–October all material must be taken to the drop off site. During other times of the year, please contact ODA.


Q: Does composting kill Japanese beetles?​
Certain hot composting conditions could kill the beetle but it is not guaranteed, which is why all yard debris from the treatment area will be transferred directly to the Hillsboro Landfill for deep burial.


Q: Where can I get a trap for my property?​
If you have reason to believe your property or location is particularly hospitable to Japanese beetle and would like to have a trap, contact the contact ODA.


Q: I live in the treatment area and participate in my local garden clubs’ plant swap, can I swap plants from my yard if no beetles are visible?
No. You should not swap plants from the treatment area. JB can be moved in a variety of ways, including in potted plants. It is likely that the current population was introduced from a potted plant that was moved into the neighborhood from a JB infested area outside of the state.

Q: How will the yard debris drop site operate during the COVID19 pandemic?
Landscapers & residents within the quarantine boundary must enter Best Buy in Town Landscape Supply through the main entrance on Cornelius Pass and park in front of the main BBIT office.
Do not call BBIT from your vehicle. Please stand in line a minimum of 10 ft apart from other customers.
A customer service person will help confirm that the yard debris is from the Japanese beetle quarantined area and direct you from where to go next. ​
​
Back to the Top